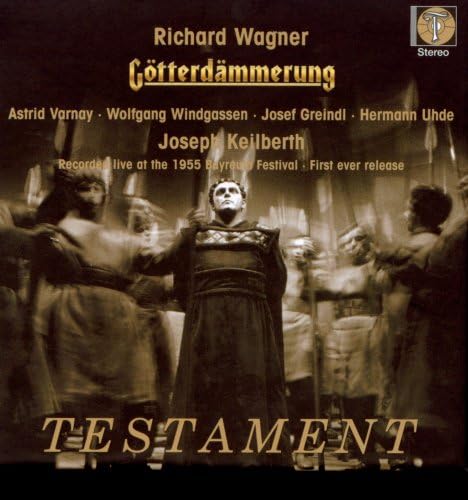 The is the fourth and final release of the first stereo recording of Wagner's Ring Cycle, Gotterdammerung recorded during the 1955 Bayreuth Festival and featuring Astrid Varnay, with Joseph Keilberth, conductor.

Testament's 1955 Bayreuth Festival Götterdämmerung completes their release of that extraordinary Ring cycle. As in the previous operas of the tetralogy, this Götterdämmerung scores on several counts. As part of the first Ring cycle to be recorded in true stereo it has important historical interest. As an example of Joseph Keilberth's revelatory conducting, it reminds us that he was a great Wagnerian. His control of the dramatic narrative is superb, with tempos that were considered fast for his time but now are convincingly apt. And as an example of great Wagner singing, it's nothing less than spectacular. Astrid Varnay is a magnificent Brünnhilde, singing with passion, her big dramatic soprano soaring over the orchestra in the Immolation Scene. Windgassen was the Siegfried of choice in the 1950s, and he fits the bill with his virile tenor and characterization. In Joseph Greindl, Keilberth had a black-voiced Hagen who conveyed real menace.

The rest of the large cast is as close to flawless as we have a right to expect, with perhaps the best Gunther (Hermann Uhde) and Alberich (Gustav Neidlinger) on disc, and in Maria von Ilosvay, a Waltraute who is gripping in her long scene with Brünnhilde. The singers are as strong in the last act as they are in the first, remarkable for this long opera. The orchestra is uniformly excellent and the sonics, if not up to today's state-of-the-art engineering, are natural, accurately depicting the voices and projecting a good sense of space and stage spread. This is a unique "i"Götterdämmerung (and "i"Ring cycle), with an unbeatable combination of great performance and decent stereo sound. "i"--Dan Davis

The is the fourth and final release of the first stereo recording of Wagner's Ring Cycle, Gotterdammerung recorded during the 1955 Bayreuth Festival and featuring Astrid Varnay, with Joseph Keilberth, conductor.