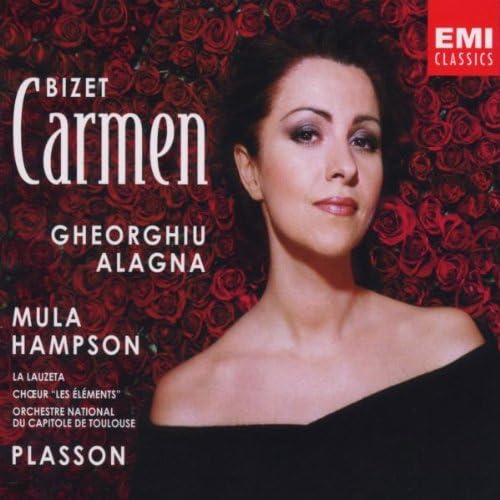 The subject of whether we need another recording of this just-about-the world's-most-popular opera, which already boasts a half-dozen very fine ones available, is beside the point. Fans of opera's most volatile and fascinating couple, Angela Gheorghiu and Roberto Alagna, will both want and need this set. It's handsomely conducted by Frenchman Michel Plasson; most of the supporting cast, chorus, and orchestra are French, and this gives the work the true Gallic flavor many other performances are missing. Non-Frenchman Thomas Hampson offers an Escamillo who is less bluster than usual, but with plenty of swagger and lightish tone, and non-Frenchwoman Inva Mula's Micaela is lovely, particularly in the first act. Alagna is at his best, singing with almost no strain, impeccable diction (despite his name, he was raised in France), great sensitivity to the text, and a real sense of characterization. The set's problem is Gheorghiu. Despite her fine artistry, intelligence, and beautiful, unique sound, it is not a Carmen sound: it isn't rich, or deep, or sensual enough. In other words, this is a very fine performance of Carmen, but it's missing a real Carmen. Leontyne Price will convince you; and in entirely different ways, so will Agnes Baltsa (on RCA), and, of course, Maria Callas. But the great singing, playing, and conducting on this new set may be enough. And there's an alternate, earlier version of the Habanera included. --Robert Levine